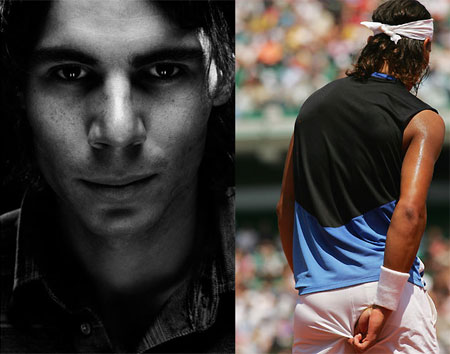 “His has been called a ‘pirate’ look, but the interesting thing about Nadal’s style is that it’s so feminine—a thinner, less physical player could not pull off those clothes. Maybe that’s why he’s been greeted with the kind of moral outrage—’Abominable!’ ‘Infernal!’—usually reserved for the latest female player to show too much skin. Debate over the pants in particular, and Nadal’s habit of reaching back to loosen them between points, has trespassed on the familiar terrain of comfort versus sex appeal. Are they too tight? Is it one of his many elaborate on-court rituals (Nadal’s own explanation)? Or are his butt muscles just too big?”