The California Senate approved May 22 as ‘Harvey Milk Day’ by a 22-13 vote along party lines Tuesday: 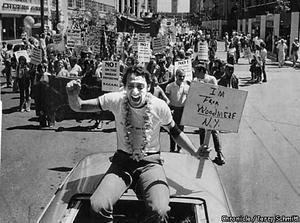 “Not one Republican voted for the bill, which also says the day shall have special significance in public school and other educational institutions and ‘encourages those entities to conduct suitable commemorative exercises on that date.’ Sen. Dave Cox (R-Fair Oaks) said his vote against the measure had nothing to do with who was involved. ‘In school, we ought to concentrate on writing, reading and arithmetic,’ he said, adding that the schools don’t need other requirements placed on them by the Legislature. The bill must return to the Assembly for concurrence on some minor amendments before it goes to the governor.”

Said Assemblymember Mark Leno, D-San Francisco, who authored the bill: “Both houses of our Legislature have now honored Harvey Milk’s important civil rights legacy, and I am hopeful the governor will sign this bill so that California officially recognizes the message of hope and pride his life inspired.”