Former Westlife singer Brian McFadden issued a statement following the furor that has erupted down under after his recent remarks that straight men don’t wear pink. 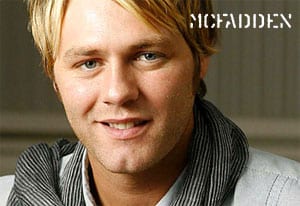 Said McFadden last week: “Saying pink is a form of red is the same as saying homosexual is a form of male….In the old days there was no such thing as gay. It was frowned upon, the church would burn you at the stake. Modern day, if you are not gay, a man should not be wearing pink, unless of course you’re in the America’s Cup and you’re one of these pansies who walk around with Gant t-shirts with your collars up, adn you wear pink and you wear white trousers with those dirty brown slip-on shoes. Then you’re just an idiot…”

Here’s the denial that he’s anti-gay in a statement via his publicist:

“To come to the conclusion that I am homophobic from these sentences is far from the truth. Some of my friends and colleagues are gay and if I was truly homophobic then I have picked the wrong industry.”

Some of my best friends are gay!

I’ve re-posted his original rant, AFTER THE JUMP…

Previous Post: « Rachel Maddow Gets Her Own Spot on MSNBC
Next Post: Ellen DeGeneres Can’t Stop Saying ‘I Do’ »