Louisiana residents will once again face the threat of being fired from their jobs for being gay or lesbian when Governor Bobby Jindal allows a 2004 executive order made by former Gov. Kathleen Blanco to expire this Friday: 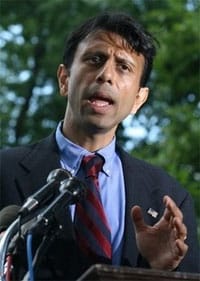 “We are not going to renew it and that shouldn’t come as a surprise to anybody. The reason for allowing the order to lapse is that I don’t think it is necessary to create additional special categories or special rights. We are firmly and strongly committed to fair treatment of all of our people and certainly don’t condone discrimination in any form.”

Said Baton Rouge businessman and former state Revenue Department secretary Joe Traigle in a statement: “Jindal, for the sake of economic development in Louisiana, should reissue the non-discrimination executive order so that the sign below Louisiana can again read ‘everyone welcome.’”