McCain told Politico in an interview yesterday that he’s not sure how many houses he owns: 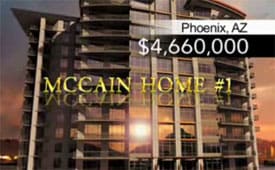 According to Politico, “The correct answer is at least four, located in Arizona, California and Virginia, according to his staff. Newsweek estimated this summer that the couple owns at least seven properties.”

McCain’s remarks prompted some chiding from Virginia Governor Tim Kaine, thought to be one of Obama’s VP prospects: “He couldn’t count high enough.”

By the way, McCain has also come up with a new answer for what “rich” is. If you’ll remember, at the Saddleback Church forum he defined it as having over $5 million.

His new answer: “I define rich in other ways besides income. Some people are wealthy and rich in their lives and their children and their ability to educate them. Others are poor if they’re billionaires.”

Brave New Films’ recent exposé on McCain’s homes and the mortgage crisis, AFTER THE JUMP…