As she and reported girlfriend Samantha Ronson arrived at LAX airport Friday, Lindsay Lohan commented on LAPD police chief William Bratton’s remarks that the paparazzi had settled down in the city because Lohan had “gone gay.” 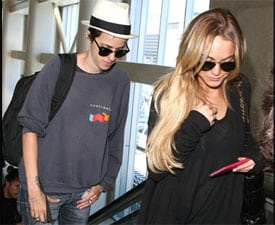 Said Lohan: “Police shouldn’t get involved in everyone else’s business when it comes to their personal life. It’s inappropriate.”

Meanwhile, take it with a huge grain of salt but rumors erupted over the weekend that the couple is set to marry later this year. A source told UK tabloid News of the World: ‘They’ve been keeping the relationship quiet for months and trying to pass each other off as ‘just good friends.’ But they’ve decided it isn’t a fling, it’s for life – so they want to make their romance public. Dina is still working on the date of the party but it’s looking like towards the end of the year.’ It is believed the nuptials could take place in November around the same time Lindsay releases her new album ‘Spirit In The Dark.’ The 22-year-old star has already bought a white Chanel mini-dress for the ceremony, while Samantha – the sister of super-producer Mark Ronson – is toying with the idea of wearing a black suit and top hat. Friends and relatives will attend the special day, with Dina determined to make the event the perfect way to ‘welcome Sam into the family.'”

Watch clip, AFTER THE JUMP…