As the Lambeth Conference came to a close, Anglican Archbishop Rowan Williams sought a “covenant” in place of a formal vote in the face of the worldwide rift in the Anglican church over its positions on gay clergy and same-sex unions, the NYT reports: 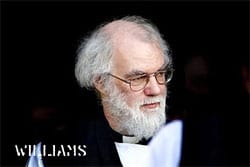 “Archbishop Williams told reporters that he hoped Anglican leaders could agree on a draft covenant within a year, but said that winning approval for it among the 44 national and regional churches of the Anglican Communion could take until 2013. That period might coincide with a push among the bishops here to hold another Lambeth meeting after only five years….In the meantime, the archbishop said, agreement was widespread for continuing ‘moratoria’ on the ordination of gay and lesbian priests and blessings of same-sex unions and for matching restraint by conservatives who threatened to walk out unless traditional views proscribing church acceptance of homosexuality prevailed. A document published as the conference ended spoke of the moratoriums ushering in ‘a season of gracious restraint’ while the covenant is negotiated.” 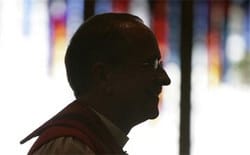 Meanwhile, Gene Robinson, the bishop at the center of the church’s split, was welcomed in Glasgow where he thanked Scottish clergy for recognizing “all God’s people.”

Said Robinson to the congregation: “It is going to end with the full inclusion of all God’s people in God’s Church. I don’t know when. It doesn’t matter when. But I know it is going to be. None of us is on the selection committee. God is on a committee of one…It is time for us to stop worrying so much about the Church. The Church is not ours to win or lose; the Church is God’s. What a dangerous thing it is to put the Bible into the hands of repressed people. They might read it and believe it. They gave it to black slaves to make them docile, but they read it and became educated. They have given it to disabled people … gay and bisexual people. Who knows who they’ll give it to next? But God will keep giving it to people too, until there’s no more ‘them’, only ‘us’.”