According to Popnography, Robert Downey Jr. tells Rolling Stone magazine that his rumored bisexuality was something he manufactured: 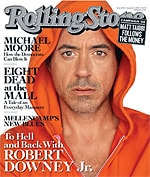 “A lot of my peer group think I’m an eccentric bisexual. That’s OK. Being relaxed about sexuality is something you’re born with…[My bisexuality] was manufactured. I didn’t have an identity. I was playing around. I expressed it. I grew up in the Rocky Horror Picture Show world, where even my butch friends turned out to be androgynous on Saturday nights.”