Brokeback Mountain author Annie Proulx has a brand new book of short stories out, Fine Just the Way It Is

, based once again on the American west. It also contains at least two stories with gay and lesbian content, according to Band of Thebes: “‘Them Old Cowboy Songs,’ is a heartbreaker about a teenage married couple, Archie and Rose, struggling in the unyielding West of 1885. Archie leaves Rose alone and pregnant while he goes to cowhand on a ranch whose owner won’t hire married men and whose foreman is gay. The sexual tension in the all male setting is constant, and seemingly expected. 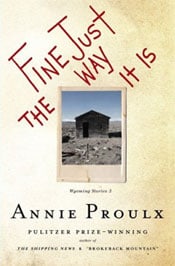 “Later Sink took the kid aside and put the boo on him, told him the facts of life, said that old Lon would bull him good if he ever agreed to get in a bedroll with him, said that the leathery old foreman was well known for bareback riding of new young hires. Archie, who’d seen it all at Peck’s bunkhouse, gave him a look as though he suspected Sink of the same base designs, said he could take care of himself and if anyone tried anything on him he’d clean his plow good. He moved off. When Sink came in from watch at the past-midnight hour, he walked past the foreman’s bedroll but there was only a solitary head sticking out from under the tarpaulin; the kid was somewhere far away in the sage with the coyotes. Just the same, thought Sink, he would watch Lon the next time he got into the red disturbance and started spouting that damn poem about Italian music in Dakota, for the top screw was a sure-enough twister.”

Previous Post: « Marc Jacobs and Lunch Date in PDA for the Paparazzi
Next Post: Posters Read ‘Death to Gays’ Ahead of First Gay Festival in Bosnia »