International human rights groups have their eye on Bosnia ahead of a first-ever gay festival scheduled for September 24 in the largely Muslim city of Sarajevo: 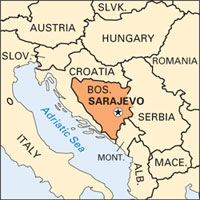 “Neither the head of the Islamic Community in Bosnia, Mustafa Ceric, nor his institution has officially reacted to the festival, which will include films and art exhibitions. But two local imams in Bosnia have condemned it. ‘We will not grab them by the neck on the street, but we have to say: This is immoral … a promotion of ideas that are in violation with religion,’ Seid Smajkic, an imam from the southern city of Mostar, was quoted as saying in Friday’s Dnevni Avaz, a daily newspaper. Another local imam, Sulejman Bulgari, said on television Thursday night that the Quran forbids homosexuality and that the holy book is clear about that. Neither imam was available for an interview on Friday, the Muslim day of worship. Several posters have appeared in the streets of Sarajevo this week, saying ‘Death to Gays.’ Police quickly removed them.”