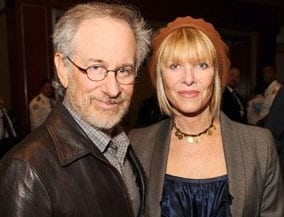 Said Producer Bruce Cohen: “It’s phenomenal that Kate and Steven are affirming their unwavering commitment to equality in such a significant a way. More than 15 years ago, Steven was the first person in Hollywood who I came out to, news which he greeted with his full love and support then and ever since. It is my fervent hope that other entertainment industry leaders will follow the lead of Brad Pitt and the Spielbergs and fight to maintain equal rights for all Californians.”

Today, the L.A. Times reported that backers of the ban are outraising opponents: “So far, the main group promoting the Constitutional amendment, which would overturn a recent California Supreme Court ruling that legalized same-sex marriage, has raised $17.8 million. The main No-on-8 campaign has raised $12.4 million.”