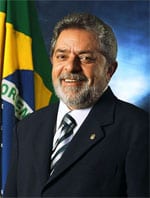 “President Luiz Inacio Lula da Silva says that in Brazil, “there are men living with men, and women living with women” who ‘build a good life together.’ But a proposed law that would give all same-sex couples rights equal to those enjoyed by married heterosexuals has been stalled in Brazil’s Congress for more than a decade. Silva said in an interview aired late Wednesday night by the government-run TV Brasil that politicians who oppose same-sex unions and yet seek the votes of gay men and women during elections are ‘hypocrites.'”

The Brazilian congress recently nixed a measure they were considering that would have legalized gay adoptions because the country does not yet recognize same-sex unions.