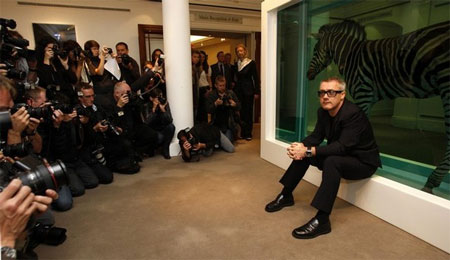 The Times Online wonders if the upcoming Damien Hirst auction heralds the death of the gallery:

“To understand what Hirst is doing by putting 223 new works up for auction at Sotheby’s, I suggest you go along to one of the presale viewings – daily until September 15, admission free – and search out his latest shark piece, The Kingdom. It’s a huge black case featuring an 8ft tiger shark suspended, as always, in formaldehyde…Once you have found the shark, imagine that it represents Sotheby’s. No, go further than that. Imagine that it represents the entire art world and the manner in which it pursues its business. See how predatory it is, how cunning, how fixated on its prey, how implacable and ruthless.”