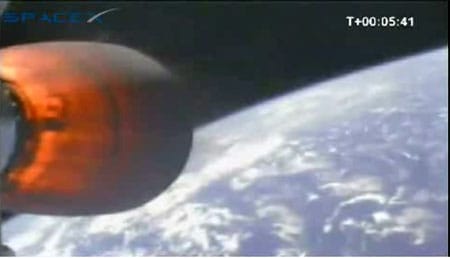 Just as Chinese astronauts were returning to Earth after their first spacewalk, a bit of space history was made Sunday in the U.S. as the SpaceX Falcon 1 rocket blasted into orbit from a Pacific atoll approximately 8,000 miles southwest of Los Angeles:

Reuters: “The Falcon 1 rocket launched by Space Exploration Technologies, a California company founded by Elon Musk, founder of PayPal and chairman of Tesla Motors, became the first privately developed, privately financed rocket to reach orbit at 4:26 p.m. Pacific time…By slashing the cost to reach orbit, and by giving satellite researchers and small aerospace companies a way to avoid the bureaucracy of NASA, the military or foreign launchers to reach space, Hawthorne-based SpaceX could enable a flash of space innovation the way the Apple II did in computing, said Bob Twiggs, an emeritus professor of astronautics at Stanford University.”

The rocket was carrying a dummy payload. It also carried a side-mounted camera and shot a beautiful video as it soared above earth’s atmosphere, showing the atoll and the curve of the earth as it climbed into orbit.