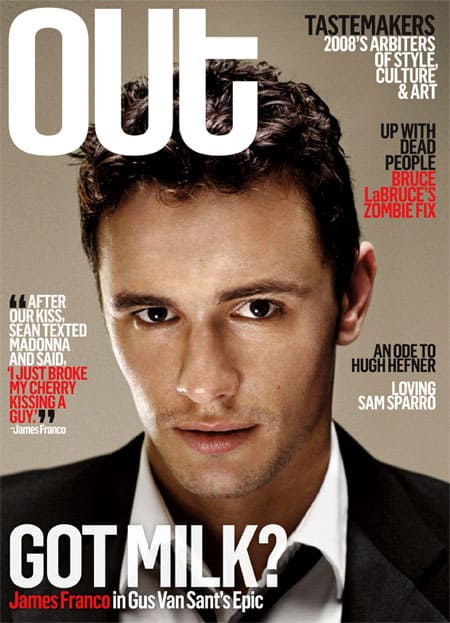 Apparently it was OUT magazine that Franco told about Sean Penn’s “popping the cherry” text to Madonna, because it’s a cover line on their latest issue.

With all the Franco publicity these days, it’s a shame Sean Penn’s MIA considering he’s the star of the movie.

Gawker has more on the interview. Said Franco of Penn: “At one point during rehearsals, the idea was thrown out that Sean and I would go to the apartment that we eventually shot in and spend a night or two there just to, like — I don’t know what — feel comfortable with each other? That idea was kind of thrown out but ended up not happening because of scheduling. I approached the relationship part as I would approach any relationship. When I’m working with another actor or actress that I’m supposed to have a relationship with, I’ll look for things in the person I like. My other hero on the film was Sean, so it wasn’t too hard to look up to him — or whatever that is….Basically, I’ve been in love with him since even before Fast Times.”