The town of Flagstaff, Arizona, where two men were assaulted earlier this year following a “Pride in the Pines” festival, held public hearings Tuesday over whether or not sexual orientation should be extended to existing civil rights laws in the city. 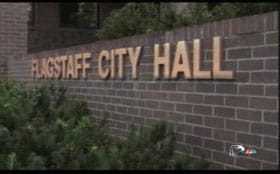 “Equality in Flagstaff has become a hot topic ever since the city proposed an ordinance that would extend civil rights to gays, lesbians, and transgender persons. The city’s Diversity Awareness Commission Chair Charlotte Dodgson said the ordinance is part of an inclusive communities initiative. ‘I think it’s something that is very needed in a community. For people to come out and state their feelings and their beliefs on changes to any ordinance in a city council.’ Tuesday’s meeting was the first of a series of public forums organized to stimulate public conversation about the issue.”

A hearing in August brought out vocal opponents and supporters: “The two sides clashed over the merits of adding sexual orientation and gender identity to the list of civil rights that are protected in the areas of employment, housing, public accommodations and education in Flagstaff. One woman told the council she thought the proposed ordinance could be abused by pedophiles and worried about the safety of her three young daughters when using public toilets. Another woman countered that gays, lesbians, bisexuals and the transgendered in Flagstaff would continue to be legally discriminated against in their workplace, public places and even in their homes unless the council adopts the proposed ordinance. Both sides quoted short passages from the Bible to make their case.”

A report, following more hearings, is expected in early December.

Watch clips from the most recent hearing, AFTER THE JUMP…