It’s good to see that reports that Elizabeth Taylor’s health was failing last month have turned out to be untrue. She was healthy enough Thursday night to make a trip out to West Hollywood gay bar The Abbey. 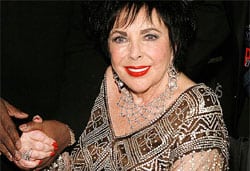 People reports: “‘She was lively. She was laughing and she was smiling,’ said one onlooker. ‘Even if she was not as strong as the last time she was here, she was once again the life of her small party.’ Back at the Abbey, the actress held court in a corner of the bar with a sizable martini and four friends (one of whom held Daisy, her Maltese dog). Before she was wheeled outside, an assistant placed a pair of rhinestone sunglasses on the ever-stylish star. ‘She needed help getting into the car,’ says the witness. ‘As [they] drove away in this gigantic black sedan, all you could see was those sunglasses and a big smile on her face.'”

Last month, after reports that she was on life support, her spokesman issued the following statement: “Ms. Taylor is fine. Her hospital visit was precautionary. She will be returning home shortly. At present, she is surrounded by family, friends and fabulous jewels.”