Dubuque, Iowa’s Telegraph Herald online reports that a local man is suing McDonald’s, saying they fired him from his job because of his HIV status after months of anti-gay sexual harassment: 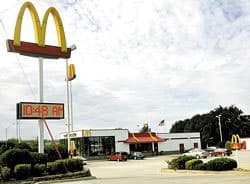 “Daniel Carver, 46, of Epworth, detailed the discrimination allegation in a complaint filed with the Iowa Civil Rights Commission. He claims it started with a failed promise to be promoted to manager and a full-time schedule slashed to 10 to 15 hours per week. A manager punched him in the stomach and a fellow employee called him a ‘faggot rat’ and slapped him with a piece of cheese, Carver wrote. Then, the discrimination escalated into death threats from fellow employees, he said. ‘In November 2007, I was threatened by other employees because of my HIV status and my sexual orientation that I, ‘better watch my back or I might get shot,” Carver wrote. He reported the comments to a manager, but the problem continued, he said. A toll-free number for employees to report sexual harassment had been removed from the store, he said. Carver was fired in February 2008, after nearly four months of employment at the McDonald’s restaurant.”

Neither McDonald’s or Carver’s lawyer are discussing the case. According to the paper, “Under Iowa law, it’s illegal to discriminate against an employee because of perceived sexual orientation or gender identity.”