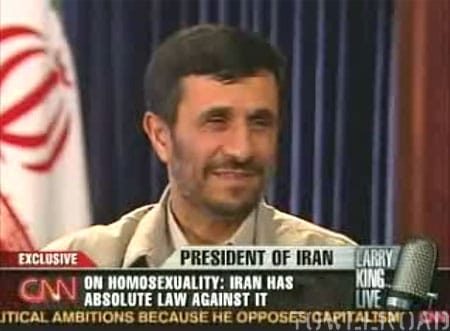 After a speech in which he declared “Zionist murderers” to have undue influence over American and European interests, and said the “American empire in the world is reaching the end of its road, and its next rulers must limit their interference to their own borders,” Iranian President Mahmoud Ahmadinejad talked to Larry King on a variety of topics. See the interview in six parts here.

King asked Ahmadinejad about his statement last year, “In Iran, we don’t have homosexuals.”

After declaring that homosexuality is “against human principles,” Ahmadinejad responded that those who violate the country’s laws against homosexuality are like traffic violations in America: “The law is the law. It’s law. And it must be enforced, of course.”

Ahmadinejad also declared that he has no interest in how people behave in their own homes.

Traffic offenders in America, however, aren’t rounded up and hanged in public.

Watch the clip (it begins at about 1:43) and read the transcript, AFTER THE JUMP…

KING: By the way, you mentioned human rights in Israel. Don’t you have some human rights problems of your own in Iran?

AHMADINEJAD (through translator): What do you mean by human rights problems?

KING: People protesting that they don’t have the same rights as other people? Homosexuals — you said last year, you denied there were homosexuals. There’s homosexuals everywhere.

AHMADINEJAD (through translator): I said it is not the way it is here. In Iran this is considered a very — obviously most people dislike it. And we have actually a law regarding it and the law is enforced. It is a law that was passed. It was legislated. And it is an act that is against human principles. A lot of things can happen. It can cause psychological problems, social problems that affect the whole society. Remember that God rules are to improve human life. In our religion, this act is forbidden and the Parliament has legislated about it. Not now, 70 years ago. This is something that happened 70 years ago, before the Islamic Republic became —

KING: So what happens to gay people?

AHMADINEJAD (through translator): Let me — well, of course, nobody has held protests. You are — are you concerned for 70 million Iranian people or a few homosexuals? Let’s assume in Iran — let’s assume in the United States that 200 million people drive cars and a million violators are rounded up and they just basically violate driving laws. Should we be worried for the 199 million people whose safety you must be concerned about or the one million violators? The law is the law. It’s law. And it must be enforced, of course. Of course we do pay attention that in Iran nobody interferes in the private lives of individuals. We have nothing to do with the private realm of people. This is at the not private, public morality. In their own house, nobody ever interferes.