Boy George appeared on Britain’s The Alan Titmarsh Show, and had some advice for George Michael, who was arrested in a men’s room last weekend for possession of crack cocaine and cannabis, and let off with a warning. 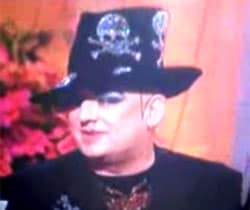 Said George: “I’m sober now – I don’t drink or take drugs and I can see that it’s chaotic and miserable. I watch it from the outside and say, ‘God I was there.’ I made a decision last year to hve no more of that. That was it for me…I do sympathise with George… you need perspective and the only way to do that is to get away from your drug problems and get yourself clean.”

He added: “If I was going give advice to George Michael, I’d say you’re very lucky to do what you do and get paid for it, as we all are. You’ve really got to get a perspective and get away from drug problems and get yourself clean and you begin seeing things in a much more sensible way…I do sympathize with him, I do. I don’t want to sit here and make laughs about him and point the finger because it wouldn’t be right.

George Michael was seen packing his bags and leaving London with boyfriend Kenny Goss yesterday. Said a witness: “They looked like they were going away for some time judging by all the luggage.”

The clip is sideways, sorry…AFTER THE JUMP…