The Log Cabin Republicans endorsed John McCain for president today following a 12-2 vote by the group’s national board of directors, Roll Call reports:

“The Log Cabin Republicans, the leading group of gay Republicans, is announcing today that it is endorsing presumptive GOP presidential nominee Sen. John McCain (Ariz.). The nod is significant not just because it allows the party a semblance of unity between its socially conservative and moderate wings but also because Log Cabin is announcing its decision earlier than it has in any recent presidential election…Four years ago, the group made its non-endorsement by the end of September. In 2000 and 1996, the group endorsed Bush and former Sen. Robert Dole (R-Kan.), respectively, after the GOP conventions. Today marks Log Cabin’s ‘Big Tent’ party in St. Paul, Minn., one of several events the group is hosting this week.” 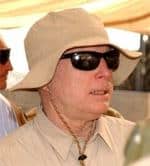 One has to wonder who exactly might be under that tent given the RNC platform.

This is a candidate who doesn’t even know what the acronym LGBT stands for. He also doesn’t believe gays are fit to adopt children, supports a ban on gays in the military, is worried if his clothing looks too gay, isn’t sure if condoms stop the spread of HIV, thinks same-sex marriage ceremonies are okay as long as they’re just pretend, and has promised right-wing religious groups that he’ll start speaking out more vocally against LGBT causes.

Said LCR President Patrick Sammon in a press release: “On the most important issue that LGBT Americans faced in the last decade—the federal marriage amendment—Sen. John McCain stood with us. Now we stand with him. Sen. McCain is an inclusive Republican who is focusing the GOP on unifying core principles that appeal to independent voters. Sen. McCain showed courage by bucking his own party’s leadership and the president—twice voting against the amendment. He gave an impassioned speech on the Senate floor, calling the amendment ‘antithetical in every way to the core philosophy of Republicans.’ He paid a political price for his vote…In recent years, too many Republican politicians have used divisive social issues in an effort to win elections. Sen. McCain is a different kind of Republican…” 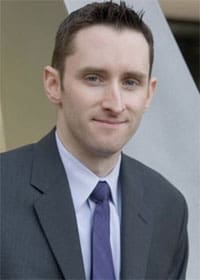 “…He understands the GOP lost its majority in Congress in 2006 largely because the Party focused on divisive social issues. Sen. McCain knows the politics of fear and division will damage our Party and our nation so he’s focusing the GOP on unifying core principles such as limited government, fiscal responsibility, and a strong national defense. We have honest disagreements with Sen. McCain on a number of gay rights issues. Log Cabin will continue our conversation with him and other Republican leaders about issues affecting gay and lesbian Americans. We will speak out when there’s disagreement—either during the upcoming campaign or when John McCain is President…Sen. McCain has always shown a willingness to reach out and engage in dialogue with Log Cabin, while considering all sides of an issue. We know that will continue when he is President. Progress in the fight for LGBT equality requires support from both Republicans and Democrats. Log Cabin’s endorsement of Sen. McCain will ensure our community has a strong voice making the case for gay rights to John McCain when he is President…I expect Sen. McCain will receive strong support from gay and lesbian Americans. LGBT people are not single-issue voters. Gay rights issues are a critical part of the equation, but so are many other issues impacting our daily lives—foreign policy, the economy, jobs, energy policy, health care reform, and taxes. Gay and lesbian Republicans believe Sen. John McCain is the most qualified person to lead our country.”

Said Log Cabin Board Chairman Pete Kingma: “Log Cabin Republicans is a grassroots organization and our membership overwhelmingly supports endorsing Sen. McCain. Our board and staff members have spent recent months getting input and feedback from our members. The consensus among our members is strongly in favor of an endorsement because of his inclusive record. Our members also support him because he’s a maverick; a trait most recently on display with his decision to select Gov. Sarah Palin as his running mate.”

In June, it was reported that McCain had been holding ‘secret meetings’ with the group.