The New York Times reported yesterday that John McCain campaign manager Rick Davis was paid nearly $2 million over the course of five years by Fannie Mae and Freddie Mac “to defend them against stricter regulations.” 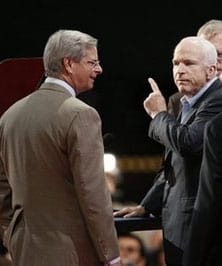 This revelation came to light as “the McCain campaign stepped up a running battle of guilt by association when it began broadcasting commercials trying to link Mr. Obama directly to the government bailout of the mortgage giants this month by charging that he takes advice from Fannie Mae’s former chief executive, Franklin Raines, an assertion both Mr. Raines and the Obama campaign dispute.”

McCain told 60 Minutes last night that he’s proud he was one of the Senators who helped pass deregulation in 1999.

Said McCain: “I think the deregulation was probably helpful to the growth of our economy.”