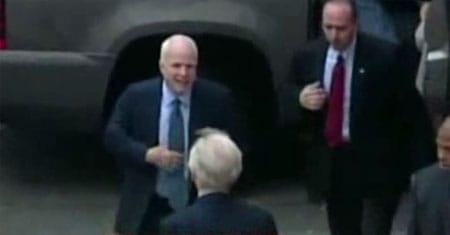 As we get some perspective on yesterday’s emergency bailout deal meeting at the White House, it has become clear that what many thought was a political stunt by John McCain to presidential politics into the worst financial crisis since the Great Depression clearly was exactly that.

“In an interview on the CNN cable news network, Dodd described a meeting in which Democrats were blindsided by a new core mortgage proposal from House Republicans, with the tacit backing of Republican presidential candidate John McCain. ‘I am not going to sign on to something I just saw this afternoon,’ he said. Dodd said Republicans and Treasury Secretary Henry Paulson had to decide what they wanted to support. The whole meeting ‘looked like a rescue plan for John McCain,’ Dodd said.”

The new proposal, in which McCain was meant to look like a White Knight who had just swept in to rescue the process for Republicans looked like this:

Bob Orr: “We’re told at the White House Senator McCain offered an alternative plan that would include fewer regulations and more corporate tax breaks for businesses, kind of a private solution. But we’re also told those ideas angered and surprised Democrats like banking chairman Chris Dodd who now says he thinks the White House summit was more of a political stunt for McCain.”

Politico: “Rep. Barney Frank (D-Mass.) said that ‘nobody mentioned McCain’ during the several-hour-long meeting on the $700 billion market rescue plan, other than Frank and that his Republican colleagues ‘winced’ when he did. ‘He’s been irrelevant to the process. He remains to be,’ said Frank. ‘I was afraid that his dropping in here, like Andy Kaufman’s Mighty Mouse—’here I am to save the day’—I thought that would slow things down. I didn’t see any sign of our Republican colleagues paying any attention to him whatsoever.’ Frank went on. ‘Nobody mentioned him. The man’s irrelevant to the whole process. No Republican mentioned his name. I’m the only one who raised his name. They winced when I did,’ he said.”

Also, the fact that John McCain “suspended” his campaign is a complete and utter farce and he is now being called by the media on it, and rightfully so:

Jeffrey Toobin is absolutely right: “Can I just quarrel with the premise of this? Who says he suspended his campaign? He’s been campaigning all day! He gave a speech in New York. He’s giving interviews all night. He’s raising money. His surrogates are attacking Barack Obama. I think this is posturing of being apolitical and frankly I think we’re being kind of gullible and falling for it. He didn’t stop his campaign. He’s campaigning…He didn’t pull his ads down. His ads have been on. And he’s done exactly what Obama’s done all day. And Obama admits he’s campaigning. It’s the middle of the campaign. I don’t see why we should treat what he’s doing any different from what Obama’s doing.”

The AP is seeing through McCain’s lie as well.

The Obama campaign last night called McCain out on the political “stunt” he’s pulling as well, sending a memo to the press.

Via Ben Smith at Politico, the Obama campaign memo, which is much less conciliatory than the press conference Obama gave after the White House meeting broke up. Both are below:

MEMO: “John McCain sought to change the subject from his out-of-touch response to the economic crisis with a big announcement that he was ‘suspending’ his campaign. But the only thing McCain really wants suspended is the American people’s disbelief. In fact, he’s been in full campaign mode the entire time. Instead of heading to Washington right away, Senator McCain stuck around in New York to do TV interviews, spend the night, and give a scheduled speech. Though the McCain campaign announced yesterday that they were also ‘suspending’ their attack ads, they continued to run Thursday. When McCain finally arrived in Washington, almost twenty-four hours after his announcement – and after Congressional leadership announced a deal in principle – he huddled with his lobbyist campaign advisors while his running mate held a political rally and his political spokesmen and surrogates were out in full force, continuing to attack Barack Obama. So make no mistake: John McCain did not ‘suspend’ his campaign. He just turned a national crisis into an occasion to promote his campaign. It’s become just another political stunt, aimed more at shoring up the Senator’s aimed more at shoring up the Senator’s political fortunes than the nation’s economy. And it does nothing to help advance this critical legislation to protect the American people during this time of economic crisis.”

The big question now is will John McCain show up at tonight’s scheduled debate? Senator Barbara Boxer accused McCain of “crawling up into the corner with his blanket.”

This whole political stunt by McCain is disgusting and pathetic. When thousands of people are foreclosing on their homes and banks are going out of business, McCain feels the need to politicize it because he knows nothing about economics, he’s sinking in the polls, and his support of the policies and the Wall Street fat cats that want to keep their millions of dollars in bonuses and salaries are what got us here. Disgusting.

By the way, WaMu failed. Who’s next as McCain stalls, plays coward, and refuses to let the public hear from him?