A new Associated Press-Yahoo News poll conducted with Stanford University concludes that Barack Obama will need a six point margin to win the election to counteract voters who are simply racist: 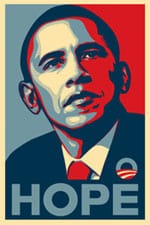 “The poll of 2,227 adults was conducted Aug. 27-Sept. 5, and was designed to probe people’s racial attitudes and how those attitudes affect voting. It shows that when it comes to race, there has been some progress in America: Most white people have positive things to say about black people. Still, pollsters found that a substantial portion of white Americans have very little contact with African-Americans – and many still harbor negative feelings toward them. Whites also have a rosier view of race relations than blacks. When asked “how much discrimination against blacks” exists, 10% of whites said “a lot” while 57% of blacks said ‘a lot.’ Asked how much of the nation’s racial tension is created by blacks, more than a third of whites said ‘most’ or ‘all.’ Meanhile, nearly three-fouths of the blacks polled said while people have too much influence in U.S. politics. Also, the perception that voters in their 20s and 30s might go for Obama because they’re less racially biased than their parents might be wrong.”