A week ago I posted about a man, 27-year-old Tony Randolph Hunter of Clinton, Maryland, who had been assaulted at Eighth and N Streets NW (see arrow) in Washington D.C. on his way to meet friends at Be Bar (see A in map). The police, who found Hunter unconscious, classified the attack as a possible hate crime. 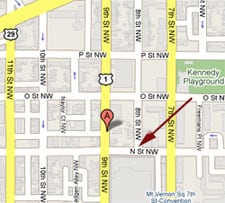 “According to a police report and accounts by Hunter’s friends, the incident began when Hunter and his friend, Trevor Carter, parked their car and were approached by four men. One of the men asked, ‘What’s up?’ The police report says the men then punched Hunter and Carter, knocking them to the ground. Eric Rhodes, a friend of both victims, said Carter told him that he swung back at the attackers before running from the scene to seek help. Rhodes said Carter assumed Hunter also was fleeing the scene, but Carter learned a short time later that Hunter had been knocked unconscious by the attackers. Officers arrived at the scene after receiving a call about an unconscious person at 11:30 p.m., Sunday, Sept. 7. According to their report, a set of car keys and $15 in cash was taken. The police report describes the attackers as four black males appearing between 19 and 22 years old, each wearing blue jeans and t-shirts.”

The incident, previously an assault and robbery, has been re-classified a homicide.