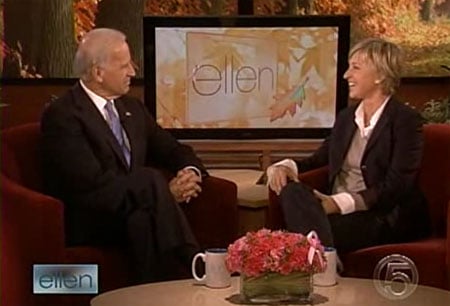 Joe Biden reiterated his opposition to Proposition 8 to Ellen DeGeneres today. Watch that clip, AFTER THE JUMP…

A SurveyUSA phone poll shows that the battle over Proposition 8, the measure that would ban same-sex marriage in California, is even:

“A SurveyUSA telephone poll taken Oct. 15 and 16 that interviewed 800 people, 710 of which were registered to vote, indicated 48 percent support the measure while 45 percent oppose the proposition. The pollster, however, said the three percentage point lead for the ban is within the margin of error and that the race is essentially tied.”

According to the BAR, “The campaign to defeat Proposition 8, the anti-gay marriage initiative, only has 30,000 donors out of an estimated 1 million LGBT Californians, the campaign’s director said Tuesday, October 14. Many of those contributors are straight allies.”

Over the weekend, a broadcast to 200 churches in California urged members to support the ban.

The ‘Yes on 8’ campaign released yet another ad claiming that the measure would affect teaching and schools. It’s the third time the deceptive claim has been made.

The L.A. Times took a closer look at the scare tactics.

The ‘No on 8’ campaign today posted a memo by a respected Mormon scholar debunking the claims.

“Morris A. Thurston, a professor at Brigham Young University law school, confirms what others have been saying for weeks – that the advertising claims that the measure would affect teaching or schools are “untrue” and “misleading,” and that nothing in Prop. 8 would affect California schools. The Thurston memo has been posted to www.mormonsformarriage.com, a website sponsored by Mormons who do not support their Church’s active campaign against gay marriage.” Download the memo (PDF) HERE.

The Mormon church has generated millions of dollars for the anti-gay campaign to pass Prop 8.

At the Los Angeles Gay and Lesbian Center’s Anniversary dinner, Tipper Gore voiced her support: “This is a struggle that must be won.”

In Northwest Fresno on Saturday, nearly 100 people turned out to a student-organized rally in support of marriage equality.

In the Huffington Post, Lane Hudson penned an open letter to Dianne Feinstein, asking where she’s been on the issue: “Your statement opposing Prop 8 is insufficient and borders on disrespect to our community. You announced the murder of Harvey Milk and Mayor Moscone to the world from the steps of San Francisco City Hall. You have not only seen first-hand the horror that results from discrimination, but have had to deal with its aftermath. That you have not joined with the campaign to actively and vocally oppose this awful assault on civil equality is shameful.”

And watch Joe Biden on Ellen, AFTER THE JUMP…