Opponents of Proposition 8, the measure banning same-sex marriage in the state say they have been out-funded and will lose come November unless they begin matching funds donated by the measure’s supporters. 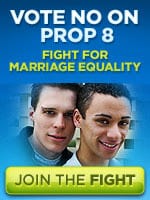 “Although the Yes on 8 campaign has not yet posted its latest fund-raising report, supporters said Tuesday that they have raised at least $25 million, compared with $15.75 million raised by the other side. ‘As a result of not being able to match dollar for dollar, we have seen a change,” said Geoff Kors, the executive director of Equality California, which is fighting Proposition 8, the proposed amendment to the state Constitution that would define marriage as only between a man and a woman. The announcement pleased supporters of Proposition 8. ‘I can understand their concern,’ said Sonja Eddings Brown, spokeswoman for the Protect Marriage Coalition. Although other polls throughout the summer have consistently shown Proposition 8 failing, she pointed to another recent poll, from CBS and SurveyUSA, which showed the measure leading slightly. Typically, campaigns do not release their internal polling information. But opponents of Proposition 8 are clearly hoping to spur donations by dramatizing the threat to same-sex marriage.”

Here’s a report on the most recent polling data. 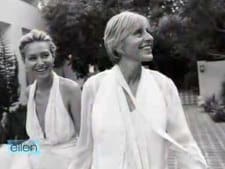 Members of the Church of Jesus Christ of Latter-day Saints, which has been a huge fundraiser in support of the ban, has its followers at the phones ready to begin an onslaught of new fundraising if called upon by the Protect Marriage Coalition, Utah’s KSL reports.

Meanwhile, in California, same-sex couples are rushing to the altar ahead of the November vote. The NYT reports: “With four weeks to go before a statewide vote on same-sex marriage, a study has found that 3,800 gay couples are marrying each month in California. The study, released Monday by the Williams Institute at the University of California, Los Angeles, estimated that 11,440 couples had married since the state Supreme Court legalized same-sex marriage in May.” 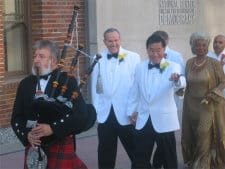 A loss in November would set back the quest for marriage equality in the U.S. by years. A win would mean dramatic changes across the country.

It’s not often I call for folks to donate on this site, but I’m making another donation this morning. I urge you to do the same and call everyone you know in California to inform them of the importance of this vote. Even the smallest amount will help.

We know that Steven Spielberg, Brad Pitt, and Pete Wentz of Fall Out Boy have made large financial donations to this cause. Others like Ellen have spoken out.

I haven’t heard about the gay and lesbian big money-earners though, matching the donations of the three above.

At this point, we will LOSE in November and it won’t be pretty.

The Courage Campaign has just produced a new video which chair and founder Rick Jacobs says demonstrates “the twisted nature of this proposed constitutional amendment.”