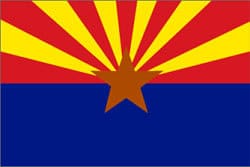 A measure amending the state’s constitution to ban same-sex marriage may very well pass there given that the measure’s supporters have outraised those against the ban by millions of dollars:

“Figures released Thursday show the campaign in support of Proposition 102 has raised $6.9 million. That’s compared to the roughly $355,000 raised by the measure’s opponents…A recent statewide poll found that 49 percent of those surveyed would support the proposal. Forty-two percent said they would vote against it, and 9 percent were undecided. The poll was conducted by KAET-TV and Arizona State University’s Walter Cronkite School of Journalism and Mass Communication and has a margin of error of about 3 percent.”