The Castro Street Fair, which Harvey Milk helped create, is on this Sunday: “The fair’s T-shirt and cover art for its program guide this year features a rendition of Milk as superhero, tearing apart his oxford shirt to reveal the source of his boundless energy and addictive enthusiasm – a carton of milk. A headline overhead boosts ‘Harvey Milk Lives.’ The shirts cost $20 and can be purchased at the fair’s information booth near Castro and Market streets.” (Below, via the BAR, a photo of Milk in a dunk tank at the 1978 Castro Street Fair, shot by Dan Nicoletta) 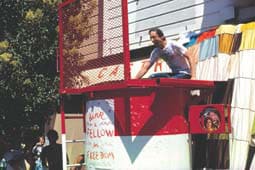 Schwarzenegger’s veto of the “Harvey Milk Day” bill helped set a new record: “[Arnold has] rejected more than 35-percent of the bills that reached his desk this year. The previous record was set by Governor Gray Davis at 25-percent. That’s according to the state Senate Local Government committee.”

California Assemblyman Mark Leno responds to Schwarzenegger veto: “The governor’s veto message … only underscores the need for an ever broader audience to learn of the hope and inspiration that Harvey Milk’s life represented. Discrimination, inequality, and injustice are global issues, which Harvey valiantly fought while sacrificing his own life to an assassin’s bullet. This veto will not deter us from our goal of sharing Harvey’s message of courage and personal empowerment with all Californians.”

Producer James Schamus on Sean Penn’s performance as Milk: “[Penn’s mimicry of Milk] is one piece of a very large puzzle. To me, what was amazing was the spiritual connectivity he had, not just with the character but with the cast. There’s a generosity to his acting in it.”