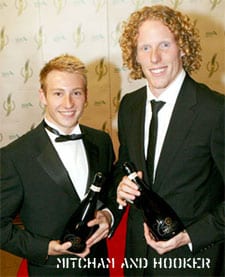 The Sydney Morning Herald reports: “Six of the seven nominees were medallists at the Beijing Games, the odd one out being 2007 MotoGP world champion Casey Stoner. But it was pole vaulter Hooker and diver Mitcham who got the nod from the judges. Hooker, 26, became the first Australian to win an Olympic pole vault title, four times clearing the bar at his third and final attempt before setting a new Games record of 5.96m. It was the first Olympic athletics gold medal by an Australian man since Ralph Doubell won the 800m title in Mexico City 40 years ago. Mitcham prevented a clean sweep by the host nation in diving in Beijing, producing the greatest dive in Olympic history on his final attempt to snatch the 10m platform title away from China’s Zhou Lexin.”

Said Hall of Fame chairman John Bertrand: “There were aspects of both performances that captured people’s imagination. Matthew had battled depression in his private life, and gave up the sport. At one stage he was diving into a pool at the Sydney Show to try to earn a dollar. At the Games he had to pull out the finest dive in history under enormous pressure to win the gold medal. It was phenomenal.”