London chaplain Peter Mullen says he was joking that gays should have “sodomy warning”. 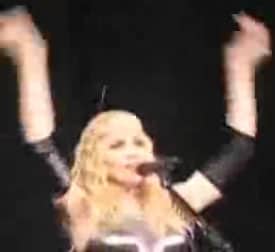 A drag queen: Beyoncé ponders what it would be like if she were a boy.

Zac Efron graduates to the cover of EW.

Russian President Vladimir Putin puts out another piece of propaganda to show what a tough macho guy he is. 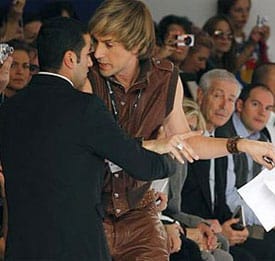 The ‘Bruno’ pranks: How long can Sacha Baron-Cohen keep it up?

New York’s hot gay nightlife destination Mr. Black is cursed — it’s shut down again. However, Mr. Black’s Stuart Black left a message on the club’s Facebook group last night, saying, “Hey Kids, expect a major announcement from yours truely in the next few days, as DJ Gant Johnson would say, i love my ‘stunts’, and this one will floor you………careful of whispers in dark corners, they are never true…………..”

Nude pandemonium strikes Tokyo’s Imperial Palace as a Spanish tourist decides to take a skinnydip in the palace moat.

Obama attends post-debate fundraiser at Al Gore’s Tennessee home: “Organizers said between 300 and 350 donors attended the event that raised about $900,000. Obama spoke mostly about his admiration for Al and Tipper Gore in his four-minute speech to guests who had paid at least $2,500 each to attend. ‘One simple commitment and pledge that I’ll make to you: That should we have the great honor of serving as president and first lady, that these are a couple of people we will be continuing to consult,’ Obama said of the former Democratic vice president.” 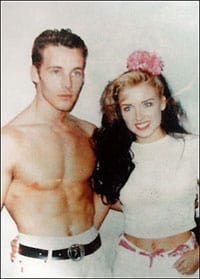 Old photos have surfaced of the first Mr. Gay UK Anthony Morley, who I reported back in May had killed his lover and possibly eaten him. Yesterday I mentioned that the trial over the grisly murder had begun. Here’s a shot of Morley posing the night of his Mr. Gay UK win, with Dannii Minogue.

Two transexuals beaten and raped in Minsk, Belarus: “After clearly enjoying the humiliation they put the transsexual men through, the bullies threw them naked and beaten to the staircase; their belongings followed closely. The neighbours who came out at the noise just laughed with what happened and called the guys «jerks», «faggots» and basically used all the foul language at them. The pair of raped and beaten men, who wish to change sex, did not revert to the local police because of the fear that the law enforcement officials would adequately respond to the situation.”