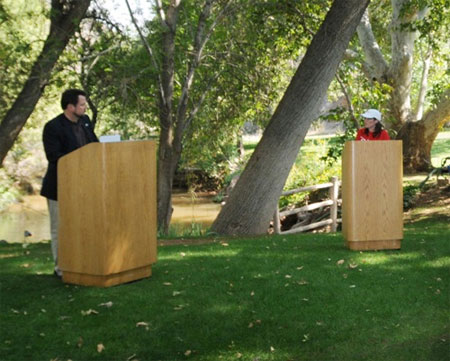 Certainly the Biden v. Palin debate is the political unknown that will have audiences fixated on TV screens Thursday night. John McCain responded to chatter about bias on the part of moderator Gwen Ifill (she has a book coming out on ’emerging young African American politicians’ which partly features Obama) by saying that he has complete faith she’ll do an objective job as moderator.

Here are some of the expectations for Palin and Biden:

NYT: Past debates show a “fluent” Palin who speaks in generalities and can’t develop arguments, and a Joe Biden who gets tripped up by his spontaneity and verbal gaffes.

What to expect from Palin in the VP debate. [daily kos]

Boston Globe: Should she be asked about banning rape kits?

AP on what to expect: high risk, big rewards.

An independent candidate who debated Palin in 2006 speaks: “When he faces off against Sarah Palin Thursday night, Joe Biden will have his hands full. I should know. I’ve debated Governor Palin more than two dozen times. And she’s a master, not of facts, figures, or insightful policy recommendations, but at the fine art of the nonanswer, the glittering generality. Against such charms there is little Senator Biden, or anyone, can do.”

CBS released more of Katie Couric’s interview with Palin this evening. In this clip, Couric asks Palin if there are any other Supreme Court decisions she disagrees with aside from Roe v. Wade.

And, you guessed it! She can’t think of any. Biden was asked close to the same question:

And now the talent portion of the competition, AFTER THE JUMP…