Gene fragments from the wax-embedded lymph node of a woman in Kinshasa in the Democratic Republic of Congo, formerly Zaire have helped scientists determine that the HIV virus was around much earlier than the mid-20th century, and began spreading among humans in sub-Saharan Africa around the turn of the centuries as modern cities began to form: 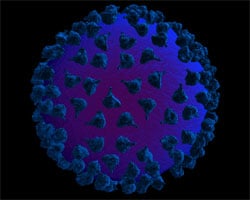 “Researchers think the growth of cities — and high-risk behavior associated with urban life — may have helped the virus to flourish. There is no cure for AIDS, which is most commonly transmitted through sexual contact.Prior estimates put the origin of HIV at 1930. But Michael Worobey of the University of Arizona in Tucson now believes HIV began infecting humans between 1884 and 1924.”

What’s that map at at the top?

It’s something I discovered completely independently of the news about HIV/AIDS but it’s related.

, which visualizes maps of the earth using software to depict the nations of the world, “not by their physical size, but by their demographic importance on a range of subjects.”

The map above features information about AIDS: “The size of each territory shows the number of people aged 15 to 49 with HIV. The highest prevalence exists in Swaziland, where 38 per cent of 15 to 49-year-olds carry the virus. More than a fifth of people in Botswana, Lesotho, Zimbabwe, South Africa and Namibia, within this age range, carry HIV.”

Here are a bunch of different maps on various topics.