One day after Governor Arnold Schwarzenegger’s shameful veto of a measure that would have approved a statewide day of recognition for the late gay rights activist Harvey Milk, gay rights and marriage pioneer Del Martin (below, left) is to be remembered at a public ceremony at 2:30 pm in the rotunda at San Francisco City Hall: 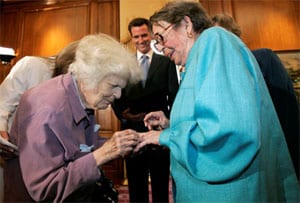 Today, Newsom penned a remembrance for the Huffington Post:

“Del Martin was an activist, a mother and grandmother, a leader in the fight for equality and, most importantly – the spouse of Phyllis Lyon. I was honored to be present at the marriage of Phyllis and Del nearly four years ago, when they were the first couple married in San Francisco’s remarkable ‘Winter of Love.’ Just a few short months ago, I was touched when Phyllis and Del asked me to preside at their marriage ceremony, held after the California Supreme Court confirmed that separate is not equal, and that marriage equality is a right and privilege guaranteed to all Californians. It felt like our whole city was there to bear witness to the remarkable love, life and work of Phyllis and Del. The two of them lived their lives out loud. They are heroes in the struggle for marriage equality.”

Newsom also called for more action against Proposition 8, the measure that would ban same-sex marriage in the state: “Proposition 8 would turn back the clock and eliminate the ability to marry for millions of our fellow Californians. That’s why, today, we shouldn’t leave flowers in memory of Del Martin. We can honor her service best by helping defend the cause she championed her entire life – equality for all.”

Watch a clip of Newsom at the recent marriage ceremony for Martin and Lyon at SF City Hall, as well as our interview with Newsom at the Democratic National Convention, his first remarks after hearing of her death, AFTER THE JUMP…