The battle to defeat Proposition 8 shows no signs of abating. If anything it is intensifying, and recent donations to the ‘Yes on 8’ campaign show frightening financial gains for gay marriage ban supporters. Here are a whole bunch of updates on the battle that have been posted SINCE Friday alone.

A school official ASSAULTED a ‘No on 8 protestor Friday night and it was caught on camera but for some reason he was not charged.

Gavin Newsom recorded a message on Prop 8 and writes a message in the Huffington Post.

A “Yes on 8” supporter has pledged a $1 million matching donation according to campaign strategist Frank Schubert. Schubert sent out this plea to gay marriage foes: “”Through the grace of God, one of our most fervent supporters has agreed to make a sacrificial gift to match, dollar for dollar, whatever you and others can donate, up to a total of $1 million. That means that every dollar you give will buy two dollars in advertising time. Please help us buy more advertising time now. And if you can make a sacrificial gift yourself, we ask you to prayerfully consider doing so immediately. The institution of marriage which we so dearly love depends on what we do together over the next few days.” 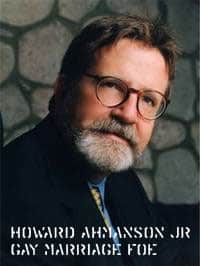 L.A. Times: “Schubert didn’t identify the big donor. But Howard Ahmanson Jr. gave another $150,000 this week to the Yes-on-8 campaign. Ahmanson is the wealthy Orange County philanthropist who has funded numerous conservative candidates and Christian causes over the years. He now has given $1.145 million to Proposition 8 backers, making him the measure’s largest individual donor.”

Associated Press: California gay marriage ban a big money race. “At least 64,000 people from all 50 states and more than 20 other countries have given money to support or oppose a same-sex marriage ban in California, reflecting broad interest in the race that some consider second in national importance only to the presidential election. Ten days before the vote on Proposition 8, campaign finance records show that total contributions for and against the measure have surpassed $60 million.” More on the money race from CBS.

Two new spots for ‘No on Prop 8’ appeared on Friday and Saturday. One features a group of mothers expressing their opposition. The other is geared toward Hispanic voters and features the stars of the television show Ugly Betty, America Ferrera, Tony Plana & Ana Ortiz.

Maria Shriver, the wife of California Governor Arnold Schwarzenegger, told KNBC-TV in Los Angeles that she is opposed to Proposition 8: “I believe in people’s right to choose a partner that they love, and that’s a decision that I have come to, and I have felt that way for a long time.” 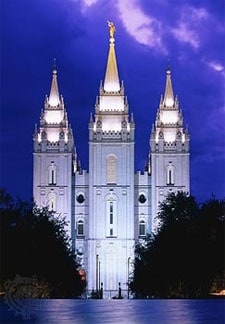 The Mormon church has SCALED BACK its campaign for ‘Yes on 8’ and curtailed its Utah campaign operation: “Church members will no longer be making phone calls from Utah to California voters, Kim Farah, a spokeswoman for the Church of Jesus Christ of Latter-day Saints, said in a prepared statement Friday. At the request of the Yes on Proposition 8 campaign, church members in Utah had been enlisted to make calls on behalf of the measure. ‘However, the church has since determined that such phone calls are best handled by those who are registered California voters,’ Farah said.”

The battle has DIVIDED Mormon faithful: “The thought of going to church in her southern California LDS ward makes Carol Oldham cry. She can’t face one more sermon against same-sex marriage. She can’t tolerate the glares at the rainbow pin on her lapel.”

Check out our report on a protest and counter-protest in Huntington Beach on Sunday.

A ‘No on 8’ demonstration in Oakland drew 50 people to the Mormon Temple on Sunday: “Holding signs that read ‘No to Mormon Bigots’ and ‘tax church property and investments,’ the protesters said they’d come to make a statement. ‘I can’t believe that a religious group that preaches truth and love is asking their members to campaign and donate to take away my civil rights,’ said Jill Shearer, 40, of Oakland. Shearer grew up in San Ramon and was raised Mormon. When she came out as a lesbian, she said her family still kept her close.” 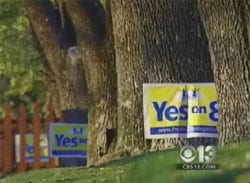 A gay couple in East Marysville was the victim of an attack by “Yes on 8” supporters: “Someone knocked on their Marysville door just after dark and fled before anyone came to the door. When Kelly Rieckert opened her front door, she was greeted by an unwanted surprise — a ‘Yes On Proposition 8’ sign was attached to a gate on her door, facing inward. Other signs supporting the proposed ban on same-sex marriage were also placed on her property. Rieckert and her spouse live in a neighborhood lined with pro-Proposition 8 posters, and never put up opposing signs in hopes of staying under the radar. Now, she says she feels targeted.” VIDEO.

USA Today: Turnout will be key in marriage battles in California, Florida, and Arizona. “Expected record turnout among blacks and young voters backing Democrat Barack Obama could cut both ways. Most members of Tampa’s African-American Beulah Baptist Institutional Church view gay marriage as ‘an abomination to God’s word,’ minister W. James Favorite says. He rejects equating the struggle for gay rights with the civil rights movement. Opponents hope young people, who a Pew Research Center for the People & the Press poll showed are more tolerant of gay marriage, will help their side.

Gavin Newsom has penned a letter to Bay Area Colleges urging a ‘no’ vote on Proposition 8: “It is up to every single one of us to take the time to change minds. In just the last week I have been blogging, emailing, texting my own friends, sending out notices to my Facebook supporters, emailing my address books, raising money and speaking out around the state.”

Finally, here’s a message that says Protect These Children by voting NO on Proposition 8:

The national implications of the passage of this ban could not be greater.

Previous Post: « Rearview Mirror: Looking Back at the Week on Towleroad
Next Post: Report: Huntington Beach ‘Yes on 8’ Protest and Counter-Protest »