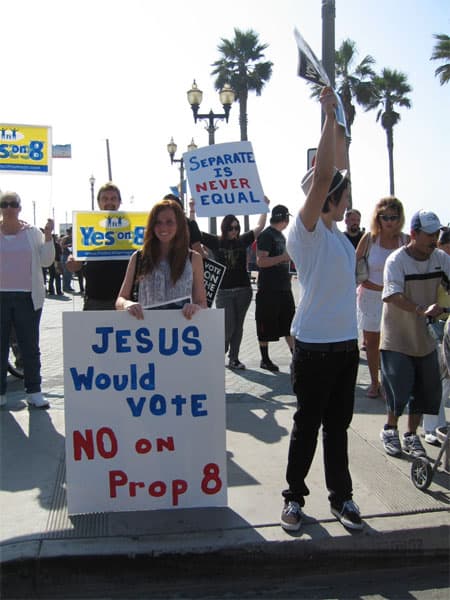 One of our readers attended a counter-protest to a ‘Yes on 8’ protest that happened on Sunday in Huntington Beach, California. He writes in with this report: 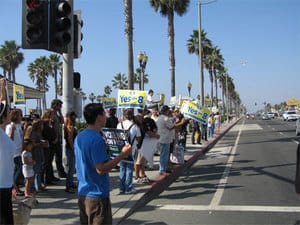 They had printed out ‘Fact Sheets’ (filled with inaccuracies, ahem, lies) from protectmarriage.com. They handed out bumper stickers and pens. Some wore t-shirts in which Yes on Proposition 8 propaganda was printed on the back in different languages. They were energized and seemed intent on winning this battle.

The ‘Yes on Proposition 8’ people were, for the most part, respectful and polite. They seemed to believe that allowing homosexuals to marry would be a slippery slope that would result in an erosion of their religious freedoms (and nothing I said could deter them from that belief). They were also believed that passage of Proposition 8 would “protect” school children from learning about “homosexual marriage”. And, of course, they always insisted that they had NOTHING against homosexuals and even have gay friends or family. They just don’t think they should be able to marry. 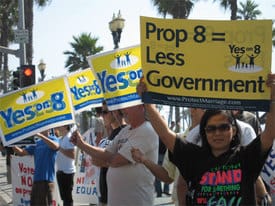 Our side had between 15-20 people. We had homemade signs (I was especially proud of the sign I made that said “Jesus would vote NO on Prop 8”) as well as a few that were professionally printed “No on Prop 8”. We had some bumper stickers that we handed out. We were nowhere nearly as organized as our adversaries. Even more disappointing was the low turnout to counter their arguments. On the positive side, I had several people walk up to me to voice their support of marriage equality.

All afternoon, cars streamed by blowing their horns in support of Proposition 8 or giving them thumbs down. It seemed that probably 60% were supportive of the Yes on Proposition 8 camp, which is actually pretty good considering the conservative bent of the Huntington Beach area.”

Thanks to our reader for that report. Please see my prior post for a huge update on the latest in the battle over Proposition 8.