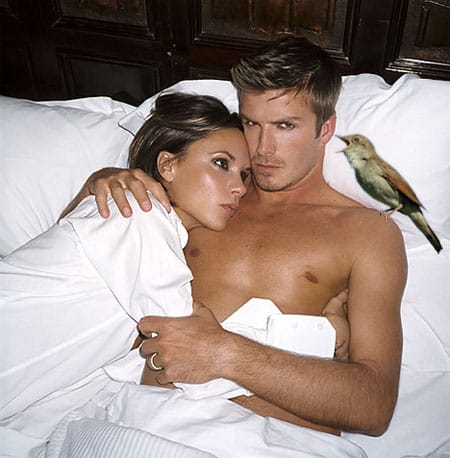 Because some people like nothing more than to see celebrities get sh*t on:

The Daily Mail reports: “Victoria, who has long battled problem skin, puts her new clear complexion down to a bizarre new beauty regime involving bird poo. And it seems David has been getting involved too. It has emerged that the stylish couple have been indulging in beauty treatments to improve their skin. Victoria, 34, has been regularly indulging in £100 Geisha Facials, using a paste made from nightingale droppings, to combat acne she has suffered since her teens. A pal told Closer magazine: ‘When Victoria was in Japan recently she was admiring the local women’s clear skin and discovered it was down to these facials. She was intrigued and when she got back to the US she found that some New York beauty salons now offer the treatment. She tried it and loved how great her skin looked. She also uses a cream derived from nightingale poo at home.'”

Previous Post: « Queen Latifah on Her Sexuality: Assume Whatever you Want
Next Post: Obama: Change the Economy, Not the Subject »