California Governor Arnold Schwarzenegger appeared on This Week with George Stephanopoulos, one day after thousands protested across the nation for marriage equality. 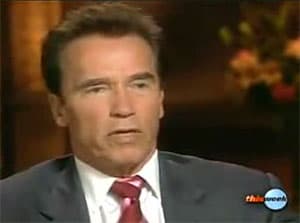 Schwarzenegger said he would not be joining Democrats who are filing a challenge in the court. He also said that although his personal belief is that marriage is between a man and a woman, he thinks the Supreme Court was right when they declared it unconstitutional, and he believes they’ll do it again when looking at Proposition 8. He told Stephanopoulos that boycotts and protest are not the way people should be approaching the passage of Prop 8.

Schwarzenegger also says he’ll declare a legal edict if advised to do so by Attorney General Jerry Brown that declared existing same-sex marriages valid in the state.

A week ago, Schwarzenegger told CNN’s John King that opponents of Prop 8 should not give up in their quest to have Proposition 8 overturned.

Watch the Stephanopoulos clip and read the transcript, AFTER THE JUMP…

STEPHANOPOULOS: Proposition 8 here in California, it passed, defining marriage as exclusively for men and women. I know you’ve said you hope the court overturns it. Will you join Democrats who are filing a challenge in the court?

SCHWARZENEGGER: No. I mean, I have been asked to join this fight, and I had my own fight with Proposition 11, and that’s what I’ve focused on.

But I made it very clear. I personally am — for me, marriage is between a man and a woman. But I don’t want to ever force my will on anyone.

I think that the Supreme Court was right by saying that it’s unconstitutional. And that everyone should have the right, just like we had the battle in 1948 and the Supreme Court decision came down, that, you know, it was unconstitutional for blacks and whites not to be able to get married with each other, and they overturned that. And since then, that has been taken care of.

And now the Supreme Court says that it’s also unconstitutional to not let gay people get married, the same-sex marriage. So to me, that is the important decision here, and everything else is not that important. So people can pass initiatives, like Proposition 187 passed under Wilson that said we should not give, you know, Latinos and those that are illegally here any educational services or any kind of medical services. The Supreme Court said, well, the people maybe had some intentions there, but it’s unconstitutional.

STEPHANOPOULOS: So you think the courts should overturn Proposition 8?

SCHWARZENEGGER: The court has overturned it. And now they went back. And the people have voted for it again, against the gay marriage. So the Supreme Court, you know, I think ought to go and look at that again. And we’ll go back to the same decision, basically.

STEPHANOPOULOS: And you believe they will.

SCHWARZENEGGER: In a peaceful way, rather than, you know, going out and protesting, and going out and boycotting and all those things. I think that’s not the best way to go about it.

STEPHANOPOULOS: In the meantime, some legal experts have suggested that you should, if you believe that, issue an edict, a ruling, that says that the marriages that have already taken place in California are absolutely legal. Will you do that?

SCHWARZENEGGER: Well, I have to get together with Jerry Brown, our attorney general, and see what the legal opinion is, because he’s my lawyer, basically. And so, we always do those things together.

STEPHANOPOULOS: But you’re inclined to do it?

SCHWARZENEGGER: It’s a conversation that I can have with him about the — if that’s the legal way to go.