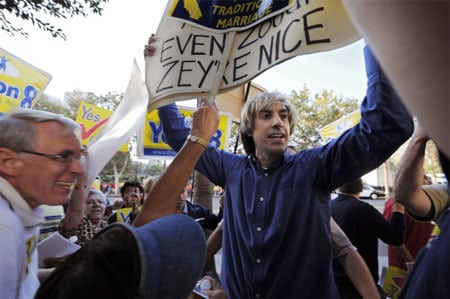 Video has emerged of “Bruno” actor Sacha Baron Cohen’s antics at a Proposition 8 rally at Los Angeles City Hall two days before the election, and (particularly in the after math of Prop 8’s passage) it’s a fairly charged piece of tape.

Bruno, for those of you who don’t know, is Baron-Cohen’s fake Austrian news reporter character, on whom he’s basing his next movie.

Sacha Baron Cohen, masquerading as Bruno, crashed fashion shows earlier this year in Paris and Milan, caused havoc at a cage fighting event in Arkansas, go-go danced in the middle of a Wichita airport terminal, and duped Ben Affleck as well as a former Israeli spy into doing serious interviews with him, and crashed a “Proposition 8” rally two days before the election where he was photographed. I posted the photos on Monday. 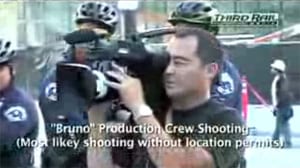 Now, there’s video of the actor arriving at the rally, where he is pretending (or at least I hope he is pretending) to be a “Yes on 8” protestor presumably in order to mock them for the film, which is his schtick. A Third Rail Media cameraman begins filming his altercations with other “Yes on 8” protestors as well as with police, and then Sacha Baron-Cohen’s crew attempts to stop the cameraman as he tries to get them on tape.

There are plenty of ways to look at this. Are the Bruno people just attempting to protect their intellectual property? And are the captions in the YouTube video an attempt to “get” Cohen for filming without a license in order to capitalize on the rally themselves? Certainly, Third Rail Media was not happy Cohen was there.

Now, whether it’s right to take such a highly-charged political and civil rights issue and use it as a foil for a comedy film is another story. Certainly in the wake of Prop 8’s passage many won’t be laughing.

WATCH the clip, AFTER THE JUMP…

A commenter on the Hot Blog notes: “Just as Bruno is using this march for his motives, a quick glance at third rail media’s website tells me that Mike Skiff is just pissed at Sasha and his crew for trying to film without a permit. This third rail group really doesn’t sound like they care about prop 8 — they’re just trying to piss on their territory. So yeah, Sasha’s comedy might not be that funny anymore, and some people might get offended that he’s doing this at the rally (not me), but Skiff was being an ass, outing Bruno like he’s so offended at Sasha’s antics, when all he cares about is “getting” Sasha. Whatever. Sasha should have quit after Borat, Mike Skiff should get over himself, and enough already jesus christ with prop 8.”

Previous Post: « Did Grey’s Anatomy Go a Gay Too Far for ABC Execs?
Next Post: Mud Continues to Fly in Palin’s Direction from McCain Campaign »