It wasn’t only that Palin isn’t smarter than a fifth grader. From an article in today’s New York Times: 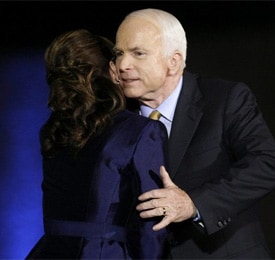 “As late as Tuesday night, a McCain adviser said, Ms. Palin was pushing to deliver her own speech just before Mr. McCain’s concession speech, even though vice-presidential nominees do not traditionally speak on election night. But Ms. Palin met up with Mr. McCain with text in hand. She was told no by Mark Salter, one of Mr. McCain’s closest advisers, and Steve Schmidt, Mr. McCain’s top strategist….On Wednesday, two top McCain campaign advisers said that the clothing purchases for Ms. Palin and her family were a particular source of outrage for them. As they portrayed it, Ms. Palin had been advised by Nicolle Wallace, a senior McCain aide, that she should buy three new suits for the Republican National Convention in St. Paul in September and three additional suits for the fall campaign. The budget for the clothes was anticipated to be from $20,000 to $25,000, the officials said…Instead, in a public relations debacle undermining Ms. Palin’s image as an everywoman ‘hockey mom,’ bills came in to the Republican National Committee for about $150,000, including charges of $75,062 at Neiman Marcus and $49,425 at Saks Fifth Avenue. The bills included clothing for Ms. Palin’s family and purchases of shoes, luggage and jewelry, the advisers said…The advisers described the McCain campaign as incredulous about the shopping spree and said Republican National Committee lawyers were likely to go to Alaska to conduct an inventory and try to account for all that was spent.”