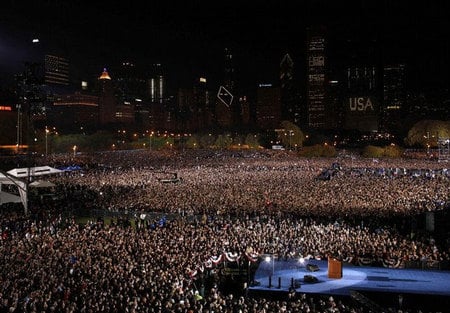 We were up late last night running a live blog to which over 8,000 of you tuned in. So thank you. It was incredible to hear voices from all over the country (and the world) chiming in. Thanks too to Corey Johnson, Matthew Rettenmund, Michelangelo Signorile, and my Towleroad partner Michael Goff, who were our panelists. If you’d like to review everything that went down, the post is here.

First things first. We have a new President, Barack Obama. Eight long years of the Bush administration will soon be over. Bush not only destroyed America and its standing in the world, it appears he pretty much destroyed his own party. I could not be more overjoyed that I am not waking up today, as in the past few elections, feeling as though we had the wool pulled over our electoral eyes by a bunch of crooks, some of whom should face the severest scrutiny for the acts they perpetrated on their own country. Anger or vengeance is not my overriding feeling right now, however. It is both exhaustion and joy.

McCain’s gracious and emotional concession speech was amazing – amazing in that, given the past two years, this was a John McCain that I did not recognize. If John McCain had run as this person and not as the hateful petty candidate he was (I believe) forced to run as by his own party, he just may have won. Instead, he appealed to the basest instincts of his party and was repudiated by a populace that refused to accept the divisions he and his running mate, Governor Sarah Palin, placed at the center of an ugly, negative campaign. Let Joe the Plumber be sent back to the dustbin of obscurity, please. 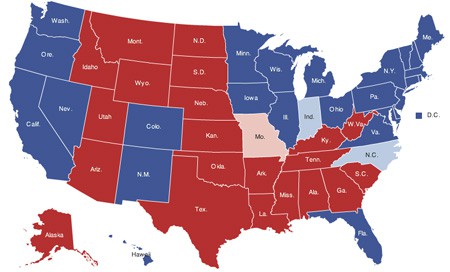 In the Presidential race, Obama’s electoral count is at 338, McCain’s is at 161, with Indiana, Missouri, and North Carolina still up in the air. Florida and Ohio are now blue states, which is amazing. In the Senate, 5 seats have been gained by Democrats, 3 are still undecided. In the House, Democrats gained 18 seats, 10 are still undecided.

Proposition 8 is still in play but right now support for the measure is ahead, 52% to 48%, with 95% of precincts reporting.

It was a battle funded to the tune of $74 million, and we may have lost it. For some reason, California voters put Proposition 2, a measure “to prohibit the cruel confinement of farm animals in a manner that does not allow them to turn around freely, lie down, stand up, and fully extend their limbs,” ahead of the marriage rights of gay people. The farm animal act passed, while gay and lesbian Americans appear to be sent back to the status of second-class citizens and discrimination appears ready to be written into the California constitution. Please do not take that statement as anger that Prop 2 passed. I’m happy it did. I’m just upset that Prop 8 looks likely to as well, and believe it will certainly play out to be a complex story.

People will be looking to place blame. The racial element in the voting will be eyed (exit polls showed 70% of blacks voting for the measure) but should not be the scapegoat. Older white voters also voted in large number for the measure. However, what should be looked at most critically is the millions and millions of dollars pumped in to pass this measure by donors associated with the Church of Latter Day Saints. The Mormons. 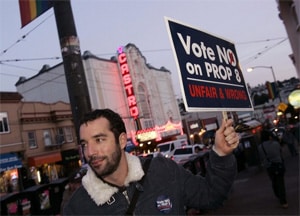 And because the measure would likely pass by such a narrow margin, one also has to consider those who could have gone out and voted but didn’t, either because of laziness or because they took an Obama win in California for granted.

One thing is for sure, what’s done is done. We must move forward. I do believe that our historic presidential win has positioned this country for great change and it is time to take advantage of that. I have spent many hours trying to get the word out about the importance of defeating Proposition 8. But I won’t let its passage squelch the hope that fills me today.

We lost on other ballot initiatives as well. Arizona’s ban on same-sex marriage passed. Florida’s Amendment 2 banning same-sex marriagepassed. Arkansas’ anti-gay foster parent and adoption measure passed. Yes, it’s done. It’s exhausting for me to dwell on the hours I spent reporting on these issues. But what can we do but move on and keep fighting?

Some other bad news:

The race between Norm Coleman and Al Franken in Minnesota looks headed for a recount.

Now for the good news:

Connecticut voters rejected a Constitutional Convention that could have taken away marriage equality there.

Gay entrepreneur Jared Polis was elected in Colorado’s second district, as was predicted a few months ago. He joins Tammy Baldwin and Barney Frank in the U.S. House of Representatives.

Anti-gay Congressman Marilyn Musgrave is gone from Colorado. Musgrave was the lead sponsor of the Federal Marriage Amendment.

Kevin Beckner unseated Hillsborough County Commissioner Brian Blair in Florida. According to the Victory Fund, “Beckner is a 37-year-old financial planner. This was his first bid at public office. Blair caused a controversy earlier in the campaign by opposing a day of silence in memory of 15-year-old hate crime victim Lawrence King.”

Kate Brown won the race for secretary of state in Oregon, making her the second-highest ranking official in the state.

No doubt there are other races I have missed or forgotten to highlight. If you feel particularly happy or angry about one, feel free to let loose in the comments, just try to be good to one another. Thanks too for participating on Towleroad during this election season.