Poet Mark Doty has won the National Book Award for his collection Fire to Fire: New and Selected Poems 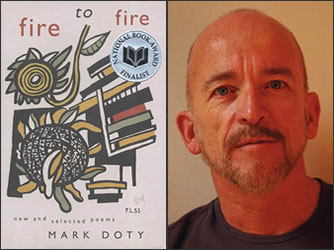 In an interview about his nomination, Doty said, “I feel completely thrilled—I’m in wonderful company, and it’s particularly satisfying to me because my nominated book is a ‘New and Selected’ poems, so it’s 20 years worth of work. To have that volume singled out feels like a kind of affirmation of what I’ve been busying myself with for the last two decades, so I’m delighted.”

He also talked about his newer work: “In these new poems, I found myself turning over notions that have always been at the fore for romantic poets: the nature of beauty, the nature of the soul, how love exists in time. I’m always thinking about beauty as a subject—that contested, difficult, fascinating ground that’s so important to me. So I wrote a poem in which I proposed a little theory of beauty. It was about the unlikely circumstance of looking at a prison tattoo on a man’s shoulder and realizing that it was quite an awkward looking thing, but it became beautiful when someone explained what it represented—it was a sign language character. This is beauty that is emerging out of knowledge. But there was more to say about kinds of beauty.”

Doty is the author of many books of poetry as well as several prose works including Dog Years and the beautiful memoir Heaven’s Coast.

Doty reading his poem “Charlie Howard’s Descent” at the Split This Rock Poetry festival in Washington D.C., AFTER THE JUMP…