I will continue adding to this list today as I receive any information on new protests. 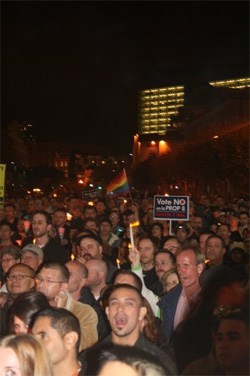 Tonight, San Francisco Civic Center, 5:30 pm. From Civic Center (Market/7th) to Dolores Park. Facebook event. “We have contacted local media and several popular websites have posted the event. Dozens of people have donated their time to hand out flyers. We are protesting on Friday in San Francisco because it was in San Francisco that the California Supreme Court decided to give equality to LGBTQ people earlier this year and it made San Francisco very happy. After all the work that so many people around the country and the Bay Area did to get to the point where we were earlier this year, we’re not going to sit by and do nothing…”

San Jose: “6:00 pm at Ceser Chavez park (Market and Park Ave) The fight for equality for all does not end or begin at the polls. So…bring your love and your rage to the Streets of Downtown THIS Friday at 6:00PM, and get the chance for everyone to hear our voices!!! Bring your friends, family, lovers, and SIGNS.”

Mission Viejo. 4 – 7 pm rally, 200 Civic Center. Equality for all Californians. “Sadly, fueled by misinformation, distortions and lies, millions of voters went to the polls on November 4, 2008 and said YES to bigotry, YES to discrimination, YES to second-class status for same-sex couples. Please join us at the Mission Viejo City Hall. Let our voice be heard. This is not about your sexual orientation, but a fight for equality and to defeat discrimination.”

Long Beach, California: Friday, November 7, 2008, 6:45pm – 9:00pm, Broadway and Redondo. “We will march from Redondo to Alamitos (Hamburger Mary’s), to tell Californians, the nation and the world that we are not second class citizens and we will not accept being treated that way.”

San Diego – UPDATE. “For tonight’s event, there WILL NOT be a march from Balboa Park to City Hall. Instead, the organizers are handing out flyers informing the public that do show up to participate in the march on Saturday instead. Regarding the march on Saturday, the public will assemble in the parking lot behind 301 University Avenue at noon, march peacefully east to the North Park Theatre. The parking lot behind the North Park Theatre will be used for march dispersal and a possible rally. The public is asked to be civil at all times and to follow the orders of the San Diego Police Department as they are doing their best to ensure the safety of all the participants.”

A protest in Salt Lake City is planned: “If Jacob Whipple gets what he’s hoping for, at least 1,000 Utahns will turn out Friday night to protest the involvement of The Church of Jesus Christ of Latter-day Saints in helping pass Proposition 8, a California ballot measure that effectively killed, at least for now, same-sex marriages in that state. The call for people to gather at 6 p.m. at North Temple and State Street in Salt Lake City is to show solidarity with those protesting in California, Whipple explained.”

San Diego – UPDATE. “Regarding the march on Saturday, the public will assemble in the parking lot behind 301 University Avenue at noon, march peacefully east to the North Park Theatre. The parking lot behind the North Park Theatre will be used for march dispersal and a possible rally. The public is asked to be civil at all times and to follow the orders of the San Diego Police Department as they are doing their best to ensure the safety of all the participants.”

This Saturday, November 8, 6pm, Gather at Sunset Junction in Silver Lake, Corner of Sunset Blvd. and Santa Monica Blvd, Los Angeles. Our reader Phillip Thomas writes: “There’s a little event planned on Saturday afternoon. By little, I mean people are flying, driving, coming by bus and train for this. I heard on tv this evening that organizers are estimating 20,000 marchers for this. I think everyone needs to take part in this. Even if just for an hour or so. Numbers matter, and I can’t think of anything that would be more memorable, historical, or significant that doing this on one Saturday evening. Forget the dinner, the mall, the bar, the movie, the relaxing night at home. If you have to work, call in or leave early. Add yourself to this crowd. Invite all of your friends, your coworkers, neighbors. Make a party out of it.”

Sacramento, California. Equality Action Now. “We are planning an event for Sunday, 11.09.2008, Capitol West Steps: 1pm-4pm Rally. Speakers. Show up and be proud. Bring Signs, Wear Protest Shirts. People from SF will be showing up at the West Steps to show support with us.”