Obama surrounding himself with pragmatists rather than ideologues: “The choices are as revealing of the new president as they are of his appointees — and suggest that, from its first days, an Obama White House will brim with big personalities and far more spirited debate than occurred among the largely like-minded advisers who populated President Bush’s first term.”

Obama names economic team at press conference today: “With the financial crisis looming as a priority of his term, President-elect Barack Obama sought to put his imprint on efforts to stem the turmoil as he introduced his economic team on Monday, nominating Timothy F. Geithner as Treasury secretary and Lawrence H. Summers to head the White House Economic Council…The president-elect also announced that he had chosen Christina D. Romer to head his Council of Economic Advisers and Melody Barnes as director of his White House Domestic Policy Council. Ms. Romer is an economics professor at the University of California, Berkeley, while Ms. Barnes is a longtime aide to Senator Edward M. Kennedy of Massachusetts.”

Stimulus package Obama’s Republicans almost all tied to Brent Scowcroft: “Mr. Scowcroft spoke by phone with President-elect Barack Obama last week, the latest in a months-long series of conversations between the two men about defense and foreign-policy issues, according to people familiar with the discussions. The relationship between the president-elect and the Republican heavyweight suggests that Mr. Scowcroft’s views, which place a premium on an Israeli-Palestinian peace accord, might hold sway in the Obama White House.” 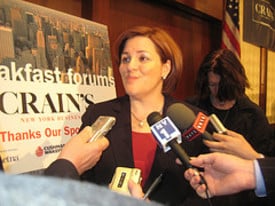 Who will replace Hillary Clinton in the Senate? “…the most high-profile potential candidate is Attorney General Andrew M. Cuomo, who has won praise during his two years in office. A Marist College poll had Mr. Cuomo comfortably leading a field of five potential replacements. Representatives Nydia M. Velázquez, Steve Israel, Nita M. Lowey and Gregory W. Meeks were all in single digits, while 43 percent of respondents favored Mr. Cuomo; 42 percent were unsure.” But could it be Christine Quinn?

Robert Gibbs named as White House press secretary: “The director of communications will be Ellen Moran, the current executive director of the Washington group EMILY’s List, an active supporter of Sen. Hillary Rodham Clinton during the Democratic presidential primary. Moran will join a team of longtime close advisers who will work closely with Obama on a daily basis.”

The Obama transition as reality TV?

Obama’s weekly YouTube address announcing he has directed his economic team to assemble an Economic Recovery Plan that will save or create 2.5 million more jobs by January of 2011, AFTER THE JUMP…