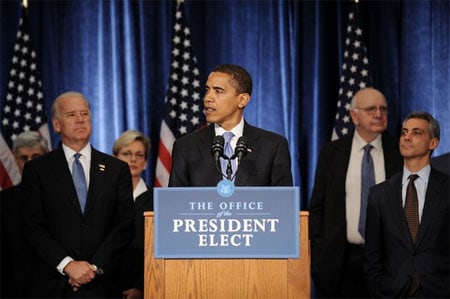 Obama transitional advisers have made a list of over 200 “Bush administration actions and executive orders that could be swiftly undone to reverse White House policies on climate change, stem cell research, reproductive rights and other issues.”

“A team of four dozen advisers, working for months in virtual solitude, set out to identify regulatory and policy changes Obama could implement soon after his inauguration. The team is now consulting with liberal advocacy groups, Capitol Hill staffers and potential agency chiefs to prioritize those they regard as the most onerous or ideologically offensive, said a top transition official who was not permitted to speak on the record about the inner workings of the transition. In some instances, Obama would be quickly delivering on promises he made during his two-year campaign, while in others he would be embracing Clinton-era policies upended by President Bush during his eight years in office.”

Obama and his family are going to make their first visit to the White House today under the auspices of President Bush.

Obama’s first press conference, which took place on Friday, AFTER THE JUMP…