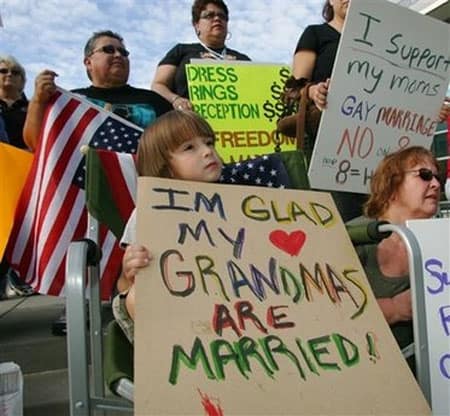 Please JOIN US tomorrow afternoon as we begin liveblogging the election results and election day news from across the nation.

A final push is underway in California and across the nation to defeat Proposition 8. Here is another huge update about rallies that happened over the weekend as well as new reporting and media clips. I will likely continue updating this throughout the day today.

If you missed our weekend updates, you can find them HERE and HERE. In addition Barack Obama reiterated his positions on Proposition 8 and same-sex marriage in an interview with MTV that aired today.

The “No on Prop 8” campaign urgently needs 10,000 volunteers on the ground to staff the final “No on Prop 8” push. They’ve been signing many up but they need more.

Here’s the final SICKENING ‘Yes on 8’ ad from the anti-gay, intolerant “protectors of marriage”.

Spread the WORD. Send EMAILS here to everyone you know in California.

SURVEY USA POLL: “81% of John McCain backers vote ‘Yes’ on CA Proposition 8, to redefine marriage. The more votes John McCain gets in CA, the better ‘Yes’ on 8 will do. 71% of Barack Obama backers vote ‘No’ on Proposition 8, to leave the definition of marriage unchanged. But white Obama backers and black Obama backers vote differently on 8, so it is an oversimplification to say, “the more votes Obama gets, the better ‘No’ on 8 will do.” The Bay Area is 2:1 against 8. Greater Los Angeles is 5:4 against 8. The Inland Empire and the Central Valley are 3:2 in favor of 8.” 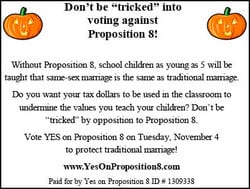 The “Yes on 8” campaign’s Halloween trick.

The Advocate goes deep into the belly of the “No on Prop 8” campaign.

The New York Times reports on the similarity between today’s Proposition 8 battle and Harvey Milk’s battle against the Briggs Initiative (Proposition 6) which would have banned gay teacher’s from the state’s public schools: “Call it life imitating ‘Milk,’ or vice versa, but the parallels between the campaign chronicled in the movie and the real-life battle over Proposition 8 are striking. Social conservatives pitted against gay activists? Check. A Republican governor (and former movie star) siding with gay Californians? Check. Close polls, a nationally watched campaign, the potential for heartbreak?”

AP: Gay marriage backers make the political personal: “In recent weeks, other gay opponents of the ban, including a Roman Catholic priest, a former Republican mayor and a small-town newspaper editor, came out of the closet to show how the issue cuts across religious and social lines.”

I posted one of these over the weekend, but these are the latest (and possibly last) “No on 8” ads: 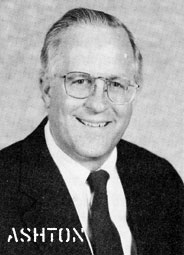 According to Californians Against Hate: “The new total Mormon money contributed to pass California’s Proposition 8 is now a staggering $22 million dollars! Just 8 out of state Mormons have given $2 million of the $3 million total in the last week alone. These are the 8 who have given $100,000 and more:

Last night in Salt Lake City, a group of Mormon mothers organized a “NO on Prop 8” protest that drew hundreds of people: ” The group held a special candlelight vigil at the plaza of the Salt Lake Library and listened to a number of guest speakers. The event was organized by some LDS mothers who have gay children. They feel the LDS church’s support of Proposition 8 takes away the civil rights of their children and they urged Californians to vote no on the gay marriage ban. After the speeches, the group marched in a procession around the city block of the library.” More from MyFOX.

SF Chronicle: Both sides make last minute Prop. 8 push. “Checks of $500,000 or more are arriving from places like Cleveland; Brooklyn, N.Y.; Linden, Utah; and Bryn Mawr, Pa. A Kansas City minister brings thousands of evangelical Christians to San Diego’s Qualcomm Stadium for a religious/political rally. The New York Times writes an editorial endorsing a ‘no’ vote on Prop. 8, even though Sacramento is 2,800 miles from the paper’s Manhattan headquarters.”

More on the anti-gay marriage rally in San Diego’s QualComm Stadium over the weekend lead by James Dobson of Focus on the Family and Tony Perkins of the Family Research Council from Truth Wins Out’s Wayne Besen. 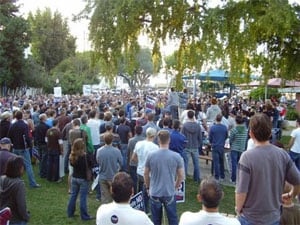 “No on 8” supporters rally in West Hollywood: “With less than 48 hours until Election Day, hundreds of “No on 8″ supporters gathered in West Hollywood Park on late Sunday afternoon, showing their resolve to defeat Proposition 8, the ballot measure that seeks to eliminate the right of gays and lesbians to legally marry in California. The peaceful demonstration was the largest of its kind in West Hollywood since May 15, 2008, when gays and lesbians celebrated the California State Supreme Court ruling that first legalized same sex marriage.”

Feverish debate in Citrus Heights: “With three days to go before Proposition 8 is settled, protesters weren’t about to let rain hold them back. ‘I saw maybe 1,000 people,’ said protester George Popko. ‘But I don’t know how many more are out there.’ … ‘Pretty much everyone out here is honking for one side or the other. I don’t think anyone is neutral on this subject,’ said protester James Adams.” ARRESTS made.

CBS: Report on the Prop 8 Battle.

HOME INVASION: The Mormons taking their religion into our homes.