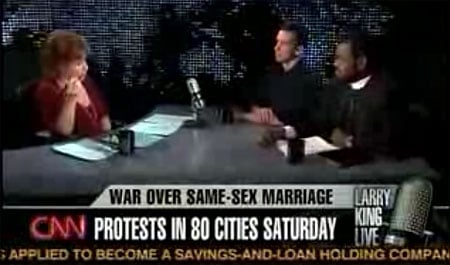 Here’s the second half of the Larry King Live Prop 8 special from Friday night that I was looking for this morning. The first half featured Cynthia Nixon. The second features Gavin Newsom, Dan Savage, Bishop Harry Jackson, Rev. Jim Garlow.

On Saturday, Dan Savage wrote on his site what he wished he’d said on Larry King:

Here’s the first half.