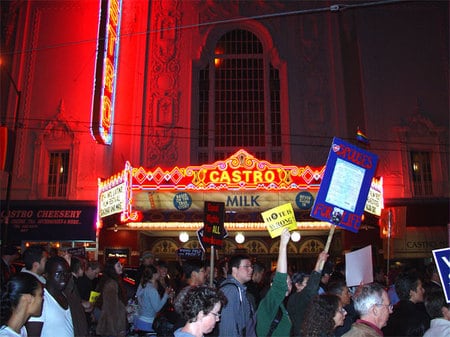 All the activity on Prop 8 this weekend has been a bit overwhelming, so I’m just going to be posting about it a bit at a time. New Yorkers, please note the upcoming peaceful demonstration this coming Wednesday in Manhattan.

The leaders of the ‘No on Prop 8’ campaign. Dr. Delores Jacobs, Geoff Kors, Kate Kendell, and Lorri Jean released a statement late Friday in response to the defeat of Proposition 8, and called on the LGBT community to stand together rather than divide itself over the devastating loss.

Said the message, in part: “We achieve nothing if we isolate the people who did not stand with us in this fight. We only further divide our state if we attempt to blame people of faith, African American voters, rural communities and others for this loss. We know people of all faiths, races and backgrounds stand with us in our fight to end discrimination, and will continue to do so. Now more than ever it is critical that we work together and respect our differences that make us a diverse and unique society. Only with that understanding will we achieve justice and equality for all.”

Also, in related news, check out this great editorial by attorney and author James Brosnahan that appeared in today’s San Francisco Chronicle.

Here are some shots from Friday night’s march in San Francisco from a reader in SF (beginning with the one that lead off this post, top) 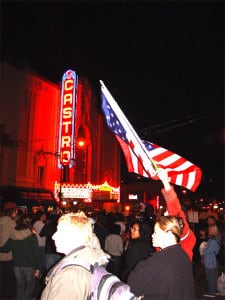 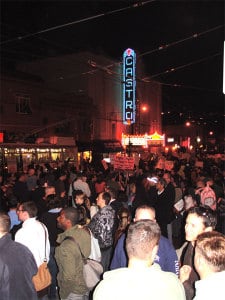 “The march began around 5:30 p.m., as the group worked its way west toward its final destination of Dolores Park. A large group remained around Ninth and Market streets, holding signs, chanting and jamming traffic. About a dozen Muni buses were stuck in the traffic mess. ‘Our rights have been taken away,’ said Debra Walker, a lesbian who has lived in San Francisco since 1981. She is a member of the city’s building inspection commission and is the past president of the Harvey Milk Club. ‘I came here because of the welcoming way of San Francisco. It is so troubling that in 2008, this would pass. The fear campaign was unconscionable.’ Walker stood holding a banner across Market Street and said she was prepared to be arrested.”

The Chronicle reported 1,000 protestors. Local station KPIX interviewed supervisor Bevan Dufty who estimated 25,000 were there at the march’s height.

More photos and video, AFTER THE JUMP… 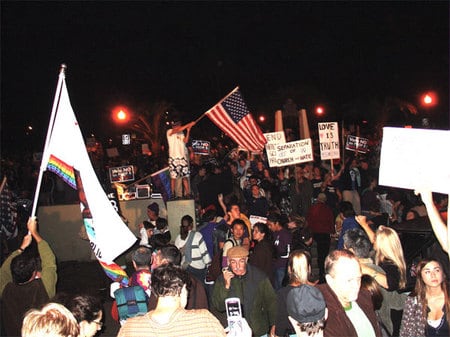 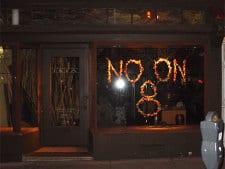 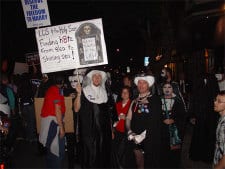 Above photos by a reader from SF.

And a few more photos from reader James Loduca: 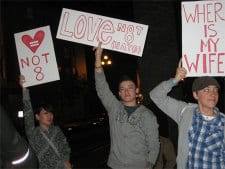 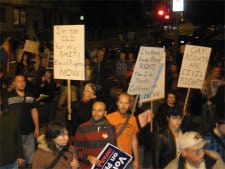 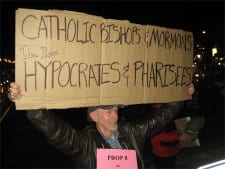 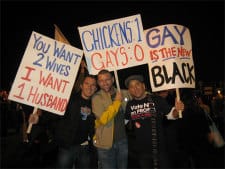 Reports on the other protests to come.