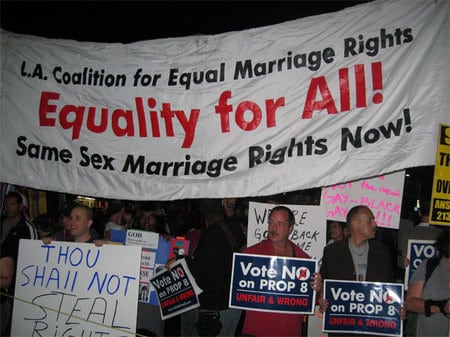 Folks came out in force in L.A. again this weekend. See our earlier post about Friday night’s march in San Francisco, and New Yorkers please make note of the upcoming peaceful demonstration this Wednesday outside of Manhattan’s Mormon Temple. Police estimated approximately 12,500 people marched in the streets of Silver Lake in the city’s Sunset Junction neighborhood on Saturday, according to the L.A. Times: 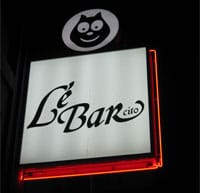 “Police estimated that 12,500 boisterous marchers converged about 6 p.m. at Sunset and Santa Monica boulevards in Silver Lake near the site of the former Black Cat bar, which the city recently designated a historic-cultural monument for its ’60s role as home of the local gay rights movement. Police guided the demonstrators through the streets for more than three hours without major confrontations. No arrests were reported.

L.A. journalist Karen Ocamb (who took these photos) reports that Noah Arc’s Darryl Stephens and Wilson Cruz (below, left) announced they’re starting a new organization to help youth stay engaged AFTER the protests – From Street to Strategy: Freedom Action Inclusion Rights…the new voice of the youth equality movement. It can be found at justFAIR or at its Google Group. On the right, below, two protestors named Corri and Kacy who were married July 25. 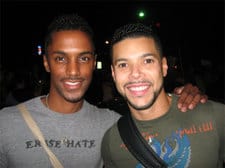 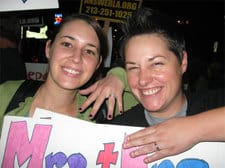 Here’s the L.A. Weekly report…More below. 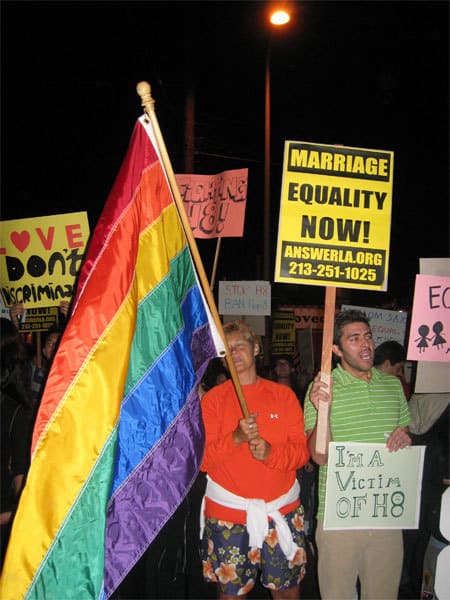 Below, two 115-year-old straight allies and Diane Olson and Robin Tyler, who were the first couple married in L.A. following May’s same-sex marriage ruling. Ocamb reported that they urge a national march on Washington D.C. 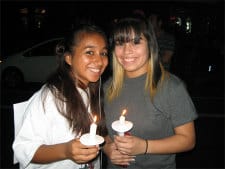 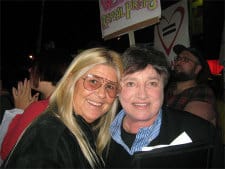 ABC7: “A small group of Prop. 8 supporters turned out to the event, but police were able to seperate them from the main crowd. Police said the marches went without any major incidents and no arrests were made. People who marched said the protest wasn’t about confrontation, but a peaceful show of unity. ‘I think it serves a big purpose,’ said Briana Lindsey. ‘It’s important for people to show in numbers that they don’t agree with this prop passing, cause it’s more about civil rights than religious rights.’ Among the people marching was the lesbian couple who led the Supreme Court case to have Gay marriage legalized in June. ‘The United States Constitution says ‘the majority cannot take the rights away from a minority’ so it’s unconstitutional,’ said Robin Tyler. ‘We are hoping that the Supreme Court is as brave and courageous as they were last time.’ Police said many of the people who marched in Silver Lake were likely headed to another protest on Hollywood Boulevard and Highland Avenue.” 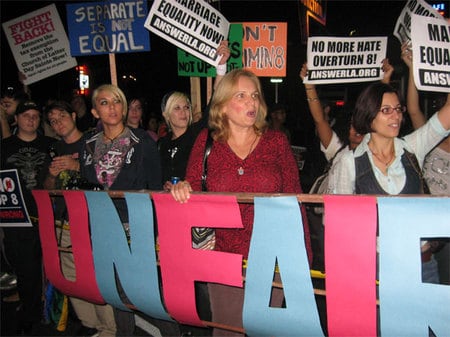 A video AFTER THE JUMP. I’ll probably be adding more.