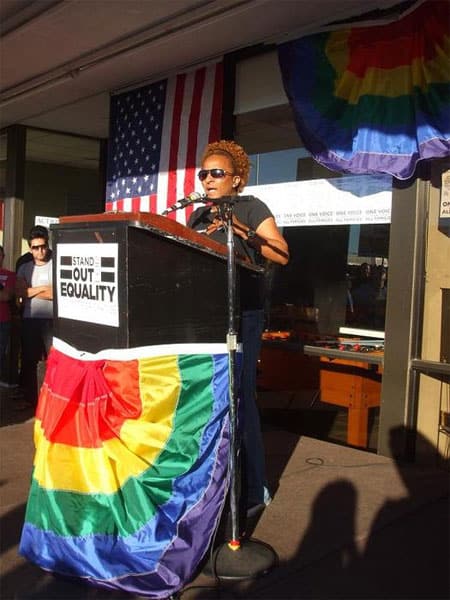 Comedian Wanda Sykes came out publicly at a rally yesterday in Las Vegas.

Said Sykes: “I got married October 25th. My wife is here. I don’t really talk about my sexual orientation, didn’t think I had to. I was just livin my life. Not necessarily in the closet but I was just livin my life. Everybody that knows me personally, they know I’m gay. That’s the way people should be able to live their lives really. If we had equal rights…we shouldn’t have to be out here demanding something that we automatically should have as citizens of this country. But I got pissed off. They pissed me off. I said, you know, what I gotta get in your face. And that’s what we have to do now. They have pissed off the wrong group of people!”

Image of Sykes by Towleroad reader Derek Washington. See more in our National Gallery of Marriage Equality photos from readers across the country.

Previous Post: « Ashton Kutcher on Prop 8: That it’s on the Ballot is ‘Ridiculous’
Next Post: CNN: Signorile vs Gallagher on Same-Sex Marriage »